As he had suggested, she parked the bright red Monte Carlo on the side street two blocks away.  She scanned the neighborhood, taking note of the run-down homes and shabby vehicles in the driveways.  Lifting the cover of her console, she removed and unlocked the pepper spray canister she kept there. 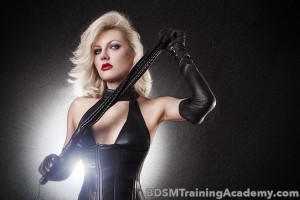 Her 5″ stilettos tapped a staccato tune on the uneven slate sidewalks.  Her expensive gray wool coat with the fur trimmed hood seemed incongruous with her surroundings, and as she walked she kept a watchful eye.  Fortunately, at 11 AM most of the blue-collar inhabitants of the neighborhood were at work, and the children at school.

She found the address and entered the dark hallway of the old Victorian home, noting the peeling paint on the double doors.  Ahead was a flight of very steep stairs.  Removing her shoes, she crept up the dim stairway and knocked on the door at the landing. She was already moist with excitement.
The man who opened the door looked exactly like his photo, except he was far shorter than he had claimed.  He leaned in to kiss her, and she pushed him away.  Having previously negotiated the scene, she ordered him to strip and kneel in the center of the living room, as she undid the toggles, and then the zipper on her coat.  Tossing the coat at him, she ordered him to hang it up, which he scurried to do.
He opened his mouth to compliment her on the black leather corset she wore, and she responded, “You will only speak if I speak to you, and if you speak out of turn I will use this on you,” and showed him the leather flogger she had brought. “Now, stand here so that I may inspect you.”  He stood as straight as he could, while she silently walked around him, appraising the slight but taut body, and the throbbing erection.
“Kneel !”  she commanded him, and stood close enough to him so that he could smell her arousal. His hands came up to grasp her hips and pull her to his mouth, and she immediately snapped the flogger against his bare buttocks.  “You may not touch your Mistress unless she tells you to” she said, and then she cuffed his hands behind his back.
“I am sorry, Mistress”, he said.  “You will be”, was the response, as she tied the silken scarf over his eyes.
He was trembling with a mixture of fear and desire. This was his fantasy come true …to be dominated by a beautiful woman. His skin stung where she had used the flogger. Now she was tickling his penis and scrotum with the ends of the leather falls. His balls tightened and pre-cum dripped from the tip of his painfully erect penis. “You like this, I see” she said. “Yes, Mistress, thank you” he responded. “What is your safe word?” she asked him, and flicked the ends of the flogger sharply against his thigh. “I…uh…I don’t know…I mean…I don’t have one, Mistress!” he stammered. “Then I shall assign one to you” was the reply, punctuated with another sharp snap of the flogger, this time on his back. “Your safe word is pathetic, because that’s what you are!” “Pathetic” he repeated, trembling harder now. “Louder!” she commanded, flogging him repeatedly on his back and buttocks. “Pathetic!” he shouted. She immediately stopped abusing him. “You certainly are” she whispered in his ear. He was startled by it, as he couldn’t see with the blindfold on and wasn’t expecting her to be so close.She dipped her middle finger into her glistening pussy, and then put it under his nose. His cock pulsed as her musk penetrated his senses. She stuck her finger in his mouth, and he suckled it. She laughed, and was suddenly gone. Then he felt her unlock the cuffs.
…to be continued…
5/5 (1 Review)

This site is for consenting adults

By Clicking  "Yes, I am over 18+ years old" you agree the following statements are true: