Your slave wants to ache for you. She wants to burn with desire for you, again and again. And to do this, you need to show her that she can feel the desire, but only you can allow her to orgasm. With a crotch rope, you can make sure her sensitive bits are as sensitive as possible during a scene or just during the regular day, causing her to remember you every time she moves and remember that she needs to please you in order to gain her release from this torment.

Tying on the Crotch Rope

You will also want to take some time when you are fastening the crotch rope to your slave. This will ensure that she is always feeling the rub of the rope on her clit. If she doesn’t feel slightly uncomfortable, she will not get the full benefit of this training tool. You can begin by tying a rope around her waist and then taking the ends and tying them between her legs and back up to the rope, as tightly as possible. Adding a few knots to the rope so that the knots rest on her clit will also help to make her squirm. It might take a few tries to learn how to make the best crotch rope, but once you have it in place, she will certain respond.

In the scenes, you will want to put on the crotch rope as soon as possible, especially during heavy bondage scenes. This will cause her to squirm throughout the entire bondage scene, allowing her to feel more and more turned on. While you are tormenting her in other ways, she will continue to feel herself get closer to the edge of orgasm, but she will not be able to release because you will not have given her permission to do so. Once you have given her permission, then you can continue to make her squirm since she will be ultra sensitive in that area, and the rope will STILL be there – until you want to remove it.

You might also want to have your slave wear a crotch rope when you will not be around. You can give her the instructions that she is not to take it off unless she has to go to the bathroom, but after that, it needs to be tied back. She is also not allowed to please herself and she needs to walk around and be as active as possible when she is wearing the rope. The more that you are causing her to feel this rope on her sensitive bits, the more that she will want to be released by you – and that can only happen when she sees you.

You can use smaller ropes that are harder to see under clothing, but she will begin to notice that the smaller ropes are actually harder to handle since they dig in more and move less. You can position these smaller ropes too so that they surround her labia and allow her to continue to go to the bathroom without removing the ropes.

The more that you use a crotch rope, the more sensitive your slave will become. She will then begin to know what the experience is like and she will begin to dread the feeling of constantly being on edge. This is a terrific training tool for your slave and it certainly makes the slave want to focus her attention so that she does not orgasm accidentally. And if she does, well, that’s an entirely different training session that begins. Click here for more bondage training and techniques 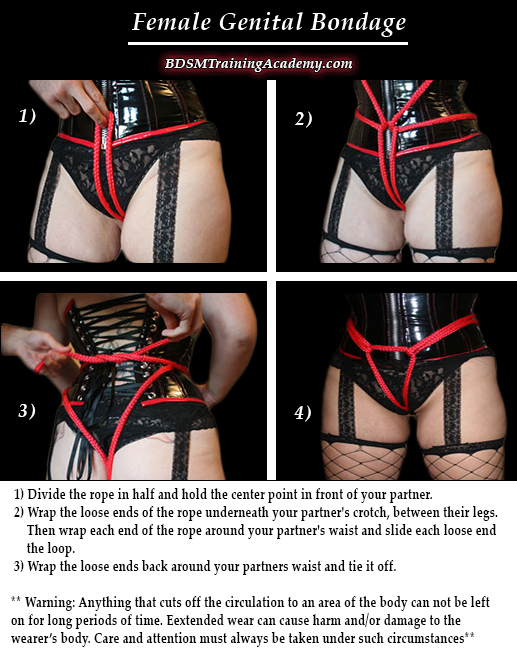