“Tonight is the night,” she whispered into his ear as she moved around the table. Her heels clicking loudly on the floor as each piercing step caused his breathing to quicken. She was slow, deliberate, and in control and he knew he was hers to command.

They had been training together for a few months, and while she was pleased with his progress, it was time to see if he could handle more than just spanking and begging to be allowed to rub her feet.

“You are mine,” she whispered in his ear.

His entire body lite up like a stop light, he felt dizzy and flush just from that one comment. Once it had escaped her beautiful luscious lips, he knew that this was the night he had been begging to serve.

Wearing only a black t-shirt and tight jeans, he walked into the backyard as he had been instructed. He had brought nothing with him, and he knocked three times on the door, as he was ordered.

The door swung open and she looked him up and down. Squeezing past her with his head down, he took ten steps into the room, as Goddess closed the door behind him. He jumped at the sound of the deadbolt falling into place. The only way he was getting out now, was when Goddess was finished using him for her pleasure.

He stood motionless in the middle of the room, with his eyes locked onto the floor desperately waiting for her to command him. She slowly began walking around him, as she traced her finger along her property. Just the feel of her finger, sent waves of pleasure rippling through his body.

He couldn’t resist looking at her for just a moment. Her raven hair fell across her shoulders, drawing his eye to her ample breasts, accentuated by a leather corset and skirt. Her eyes were darker than usual, and her bright red lips moved with disdain.

“Why are you looking at me?”

His eyes immediately shot back to the spot on the floor. He’d already made a mistake, but she was so alluring and exciting. He’d forgotten his place already.

He quickly turned around, trying to keep his breathing calm and slow.

“Take off your shirt and jeans. Fold them nicely.”

He complied, neatly folding them in the way he’d been instructed, and holding them in his arms. Waiting for the next command, he closed his eyes to avoid being tempted to gaze at her again.

She was silent, surveying the scene. She walked around him, looking at his body, lean with some muscle. He was not the most impressive male specimen, but he was fit and training would benefit him.

“Place your clothes on the chair to your right.”

“Return to me. Close your eyes and stand with your legs spread apart.”

He hadn’t worn any underwear, as instructed, and he began to feel the cold rush of air as it hit his slightly sweaty skin. His penis began to stiffen at the sensation, as he pathetically tried to keep himself calm and limp until allowed permission.

“I see you’re trying so hard to not be hard.”

“Yes, Goddess, but it is very hard to do so in your presence.”

He heard a noise that he didn’t recognize and some metal, as though from a belt.

He smelled of leather filled his nose before it touched his skin, cool and unrelenting. The leather band gripped and squeezed his scrotum and began to excite him, but it was the way his arms were led into the sleeves that reminded him who was in control.

She was. She always was. 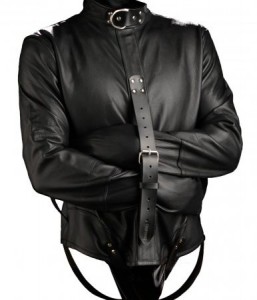 The arms didn’t have any holes in them, and he realized that he was instantly helpless. She brought his arms into the proper position and buckled them behind him, pulling them tighter and tighter.

“We can’t have you going anywhere, now can we?”

Running her hands down his arms she pulled on them to make sure he was tightly bound.  Slowly gracefully sliding her fingers over the strap holding his little manhood.  With just that slightest touch, he lost the battle with his erection.

“Looks like I have given you too much freedom.”

Coming behind him, she firmly pulling on the straps running over each ass cheek, forcing the strap to grip tightly on his scrotum.

There was something in the way she spoke that caused him to shiver. Of course, he couldn’t move too much as his hands and arms were closely strapped to his body and each time he did flinch, the leather strap between his legs would pull on his tiny cock and arouse him even more. 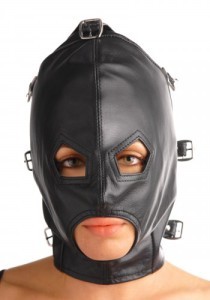 His eyes when he felt more leather being placed over his head. The smell of leather overwhelming his senses. Opening his eyes, he realized he could still see, and his mouth was still exposed, but the secure straps in the back made him feel confined.

She laughed. “Oh, you say that now, but just wait.”

She then attached a muzzle over his mouth. This eyes went wide as he desperately tried to gasp.

“You may look at Me one last time.”

The leather hood muffled his hearing and took away all of his senses. The only thing he could do was to 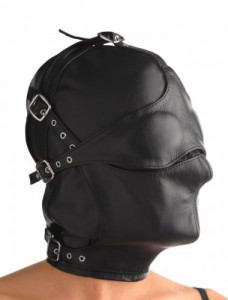 stand and wait for what was to come next.

For a while, it was quiet. Perhaps it was the leather hood, perhaps it was not as long as it felt, but time disappeared. All he could do was stand and wait in desperate anticipation, his body completely secure and his mind racing.

She looked at her leather slave, all packaged up and ready for her. He didn’t move because he knew that good things happened when he was completely compliant.

All he could make out were muffled noises which seemed to come from nowhere and everywhere.  The clanking of small metal objects, and the brushing of leather against flesh. He had no idea what was going on, but had a million ideas going through his head as to what it could be or what he hoped it would be.

Her slave had been so eager to please whenever he served her and he had been begging her to allow him to serve in such a beautiful manner.  This was going to be his reward for such loyal and eager service she thought as she pulled the harness over her legs and tightened it around her hips.

She led him over to a bench that was previously hidden from view. He took small steps as the leather drove further into his crotch. The moan that escaped was hard to hear under the muzzle, and he was diving deeper into the subspace that clouded his mind.

He began to forget the outside world, all that existed was her touch.

Soon he was going to realize who really had the power in this relationship, as she stroked her cock. Pouring lube over her vibrating cock, as she rubbed in, getting it nice and wet with lube.

She leaned him over and started to spank him getting his ass slick with lube. A slave should always be wet and excited for their Goddess she thought as she looked down at his shinning red ass.

Unable to move, he surrendered to each wave of pain and pleasure. Thankful for every second of service. He tried to move his arms and he tried to call out, but she was completely in control. His moans muffled by the hood as the sensations consumed his every thought.

Just as he was sinking into oblivion, she began to run her fingers along his tight lil asshole, as she continues to pour more lube over his asshole and cheeks. It was cold and he jumped in shock, which only made her laugh.

His breathing quickened in pace as he struggled for air. She undid the muzzle, as she slide a finger into his tight pink man pussy.

“I want to hear the pleasure you receive from My cock”

“Yes Goddess, your man pussy is ready for you”

He tried. He did not want to disappoint her, all he wanted to do is serve her however she wanted. To prove he was worthy of serving her.

“What do you say slave?”

Soon he was squirming in ecstasy, desperate to find some way to make the pleasure stop. He felt his whole body heat up, his head began to spin as he felt his body reaching the point of no return.  He begged his Goddess to stop, he pleaded to her, but her cock kept thrusting into his tight lil hole and the vibrations carried through his body.

“You wait for Me to give you permission, you lil slut”

“I am truly sorry Goddess

He hung his head.

She snapped her teeth.

“It looks like we have more training to do.”

This story is a work of fiction

By reading and accepting this story you agree to all of the following: You understand that this is simply a fictitious story
(and not advice). You are responsible for any use of the information in this work of fiction, and hold BDSMTrainingAcademy.com and all members and affiliates harmless in any claim or event.