How did you discover you were interested in being Spanked?

Now I know everyone’s story is different and it seems like a lot of us are divided into two different categories: The people who late in life when someone suggested trying it and the people for whom it had been an interest their whole life.

I fall into the second group, I have been interested in spanking as long as I remember. Now no one spanked me, I never saw anyone being spanked. All of my exposure was just in book and films and there wasn’t a whole load of that.Its just that whenever I saw anything about it, in a book or a film or tv it just fascinated me. And obviously I didn’t realize it was anything sexual as I was too young to have sexual feelings. I just thought that looks really interesting…that looks really great.

And I know lots and lots of people who have had similar experiences they just always knew there was something special about it. And when they became old enough to have sexual feelings they realized…Oh ok so that’s part of my sexual identity.

Now that could be a nice discovery or it could be as it was for me a really worrying discovery because I thought: God if I’m into that there won’t be anyone else who’s into that and I’m going to be really lonely and I’ll never get to actually experience it.

Fortunately, those things turned out not to be true. And I will probably always be grateful for that because it turns out there is a whole community of people who like exactly what I like. And just as I was a heterosexual woman going around wanting to be spanked, there were lots of heterosexual men going around wanting to do spankings. And every like other permutation, of course, I am a female bottom but there are lots of male bottoms, there are female tops as well male tops and there are lots that switch.

I don’t switch myself, but we are all represented in the spanking world. 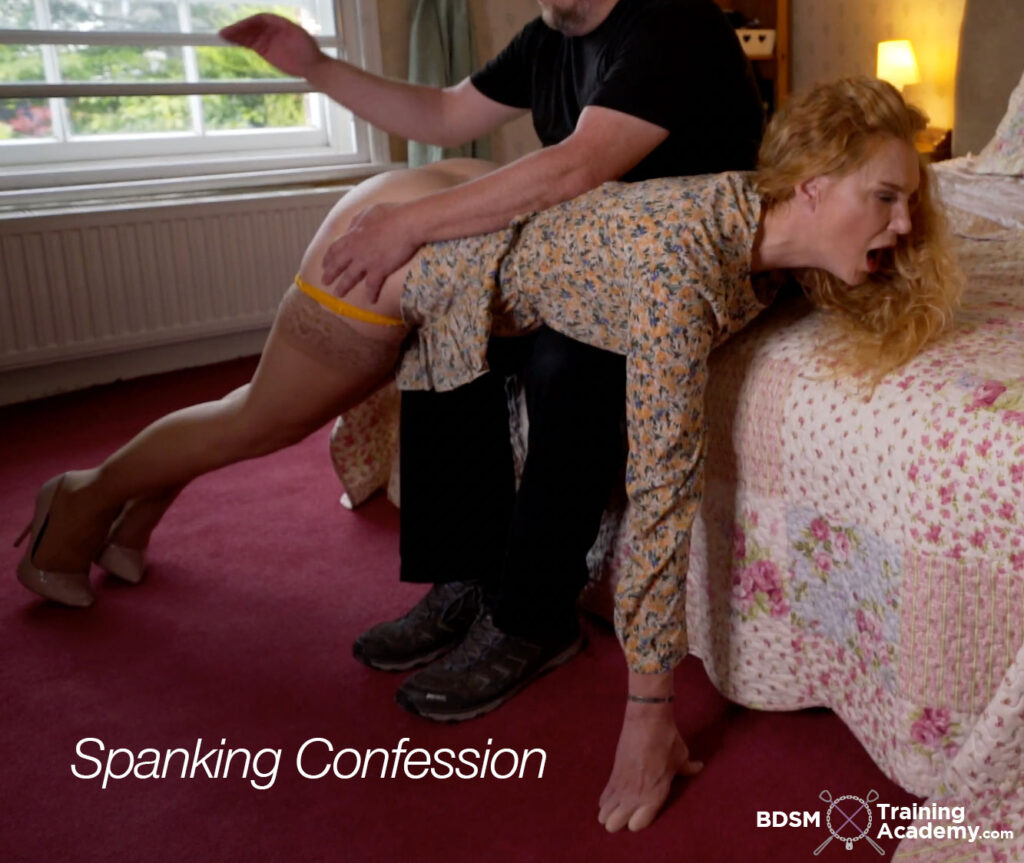 What is it about being spanked that you enjoy so much?

Well there are a few things, firstly I can’t deny to it turns me on. So just from a physical point of view it works, it works in the same way that I guess vanilla foreplay works for people who aren’t into spanking. It makes me feel like I want to have sex.

But it’s way more complicated than that, I like the physical sensation of it. I like the kind of feeling of warmth and well pain. I like some sorts of pain applied by some people to some parts of my body. So it works from that point of view.

I also to be honest really like the aspect of role play to it that you can although no one is ever going to punish me in real life for having done something. I like roleplaying that idea, it can be quite cathartic and if you negotiate with your partner the idea of being punished for something you have really done wrong it can be…in the moment it can feel quite therapeutic.

What was your favorite spanking experience? What made that experience so amazing?

Oh Gosh…this is tricky to answer because I’m a spanking model so I’ve had a lot of really really good experiences with spanking. I’ve been very very lucky…in terms of my favourite I supposed a very early experience was really good for me and it was because it was new to me. So I suppose it’s particularly vivid so I think it was my second ever spanking shoot and it was with Dallas Spanks Hard.

Who’s work I really loved and I watched a lot of it before I worked with him. So he was a bit of an idol for me I suppose. And he’s spanking look really severe, they were very nonsexual disciplinary kind of storylines so they had quite a real life feeling to them, even though they were being filmed.

So I went to work with him and I remember I was really frightened because his work is quite hard, it’s quite intense. But I really wanted to because I wanted him to be pleased with me and I wanted to be a spanking model and it felt like a good way to launch my career in that regard. And it was just lovely, it was really intense, at times kind of on the edge of too intense for me which makes it a really exciting journey.

And during the course of it, I really started to believe I had done something wrong and that he was in charge and he was punishing me for it. And of course that wasn’t true but kind of giving into the storyline…it was a lovely feeling and I had never done that before and it made me realize I really like roleplaying real life disciplinary stories. They’re really powerful for me, they work really well, they make me feel really good.

So that was an excellent spanking experience and I’m very glad I had it so early on in my career and in my spanking life because it told me a lot about what I wanted to seek out in the future. 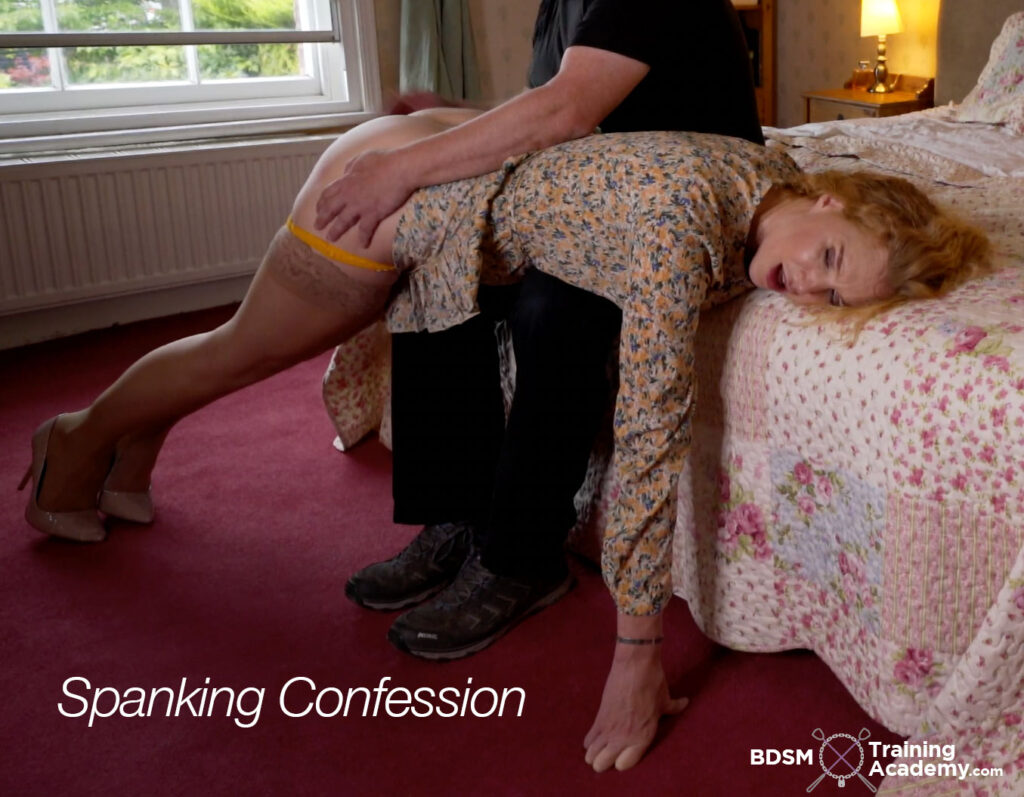 What was your favorite spanking experience? What made that experience so amazing?

Oh Gosh…this is a horrible story so I will try to tell it quickly. So it was still when I was quite new spanking model, I did a spanking shoot for a company, who I had not worked with before and they had three models being spanked that day. And they had not told the other two models that it was a real spanking shoot. So I knew but they didn’t know and it became apparent really quickly they didn’t know. And both of them were very distressed by it because if you are not into being spanked its just violence. So eventually both of them dropped out of the shoot, quite rightly and the director said that I’d just have to do all of the stuff they couldn’t do. So what happened in the end was I ended up being caned by two people at the same time with two different canes standing either side of me.

And it was just…I was new, I had only been caned once before…this was too many cane strokes, too hard, too fast and they cut me with the cane in several places. So I was bleeding and looking back knowing what I know now none of that should have happened. With a new model they should have told me how many strokes it was going to be to begin with, so that I could agree because it turned out being way more than I had expected. They should have slowed down when they realized that it was too much for me, they shouldn’t have made it faster because in the end I couldn’t keep still. Which is how I ended up moving around too much…which ending up giving me injuries and cuts in places…well I shouldn’t have had any cuts.

That was a really horrible experience and it made me think…maybe I shouldn’t do this, maybe the spanking world is going to be full of people like this. Fortunately, I can confirm 15 years later that the spanking world is not full of people like that and it remains the worst experience I’ve had, nothing else like that has happened to me in my career since.

I have learned to be quite assertive because I think it is quite important. But it was fortunately a one off and that company is no longer in existence and I think quite right too because that was really quite…really inappropriate situation. And now with the knowledge I have, I look back and I think not only was the producer wrong to do that but actually the performers who were doing the caning should take some responsibility for that as well because they were professionals. And they should have known caning a new model like that was not the wisest choice.

You can learn more about Ariel and follow her amazing work at:

This site is for consenting adults

By Clicking  "Yes, I am over 18+ years old" you agree the following statements are true: